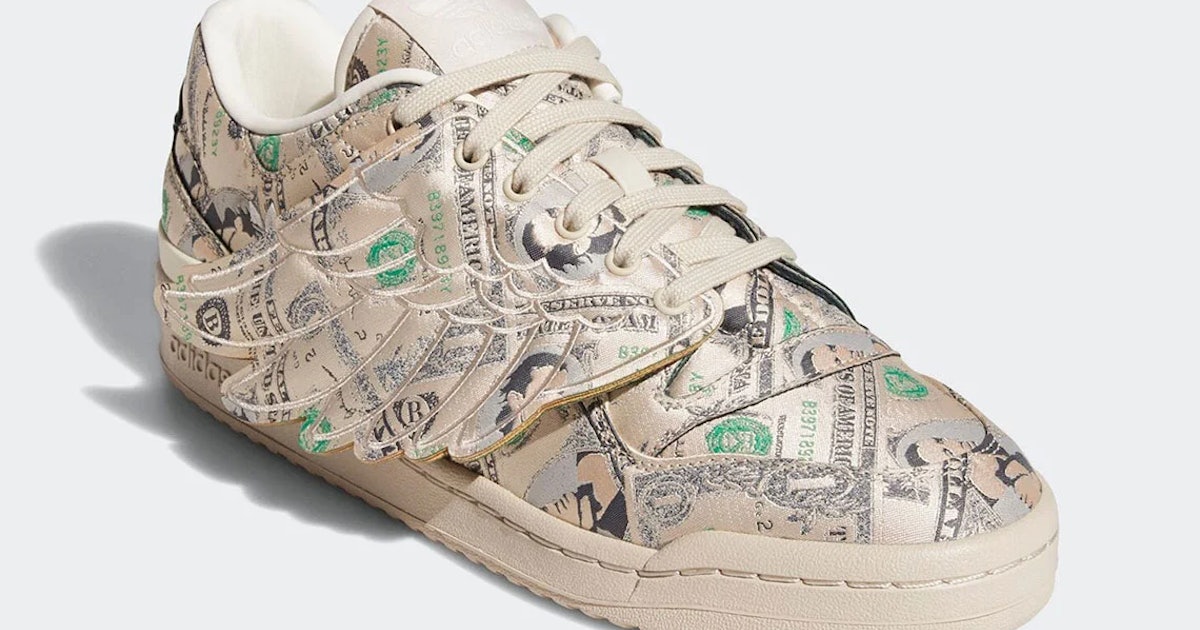 Jeremy Scott initially launched his famous Adidas Forum printed silver sneaker in 2003, when he and the brand launched just 100 pairs. Now, having re-released 1,200 pairs of slightly more accessible high-top shoes, Scott has unveiled another take on the silver-covered sneakers.

A Forum 84 Low ADV slightly attenuates the designer’s maximalist style, reducing the model to ankle height while showing off its signature dollar pattern and winged ties. Its release marks the first time the JS Money Wings sneaker has arrived as a low-top shoe – although the Forum’s next drop may be the last chance people have to buy the design.

A race for your money – The entire Forum upper is covered in silver graphics except for its cream laces, Adidas Trefoil tongue tag, and Three Stripes. Unlike its high-top counterpart, the low top sneaker doesn’t feature dark green accents, making the design slightly more wearable. Scott’s signature remains etched on the medial midsole for good measure.

The detachable wings rest next to the lace unit, also bearing a silver print. Their design has changed slightly from the early Wings models – angled down rather than pushed back toward the heel – although much of the shoe remains intact to pay homage to Scott’s first venture with Adidas.

With that in mind, the Forum 84 Low ADV sneaker sports $ 100 bill graphics to nod to the original $ 100 price tag of the JS Money Wings. Still, the US dollar shown on the sneaker isn’t entirely accurate – Scott’s own face replaces the historical figure typically found in the center of the bill. Co-branded soles complete the design.

Bet your last dollar – Although Adidas has not announced how many winged low top sneakers will be released, past drops suggest the stock will be very limited. As of now, the Money Wings Forum 84 Low ADV is scheduled to launch on October 21 on the Adidas website, retail at $ 200 – and unfortunately, cash on Scott’s face is not considered a valid payment option.

Money doesn’t buy happiness, but it can definitely buy you Jeremy Scott sneakers. Isn’t that the same thing?

The way to develop a sustainable shoe