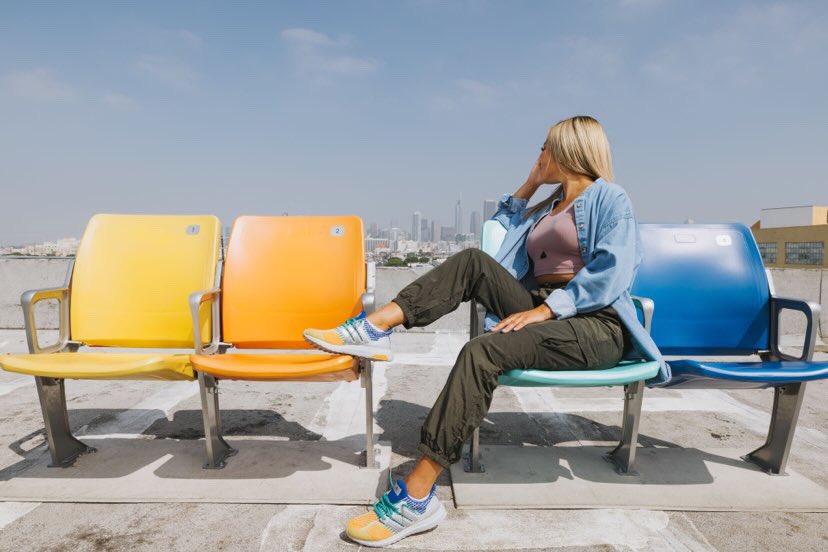 As the Los Angeles Dodgers are in the midst of another post-season run, Adidas is celebrating the rich history of Dodger Stadium through a special version of the brand’s famous Ultraboost sneaker.

The Adidas UltraBOOST 5.0 DNA “Los Angeles” releases Saturday, October 15 at select retailers and adidas.com in limited quantities. The shoe consists of the same aesthetic found with the different colored seats at Dodger Stadium.

Former Dodgers owner Walter O’Malley famously designed them so that each level represents a specific component of Southern California.

Dodger Stadium’s upper deck seats are a light blue in an ode to the ocean, while the reservation level is more of an aqua green or couture moss for the landscape that surrounds Chavez Ravine.

The seats at the lodge level are light orange to represent the sand of the beaches, and the ground level is yellow due to the sunny weather seen in Los Angeles year-round.

Alongside the release of the shoe, Adidas will also sell four limited-edition posters designed by a local artist in the same color scheme that celebrate Los Angeles landmarks.

Last season marked the 60th anniversary of Dodger Stadium, which opened on April 10, 1962.

The Los Angeles Ultraboost isn’t the first connection between the Dodgers and Adidas, as Justin Turner and Trea Turner are both sponsored by the brand.

In 2019, Justin Turner and Kiké Hernandez were part of Adidas asking Jonas Never to paint a mural at Philippe’s house to celebrate the anniversary of the Dodgers’ move from Brooklyn to Los Angeles.

“It was a great day for Adidas and Philippe to honor the move of our historic franchise from Brooklyn to Los Angeles and to house it in a historic location in the heart of Los Angeles, which made it even more special,” Turner told DodgerBlue.com at the time. .

Do you follow Dodger Blue on Instagram? It’s the best way to see exclusive game and event coverage, get your questions answered, and more!

Foundation sets a goal of $185,000 during its annual campaign | News, Sports, Jobs