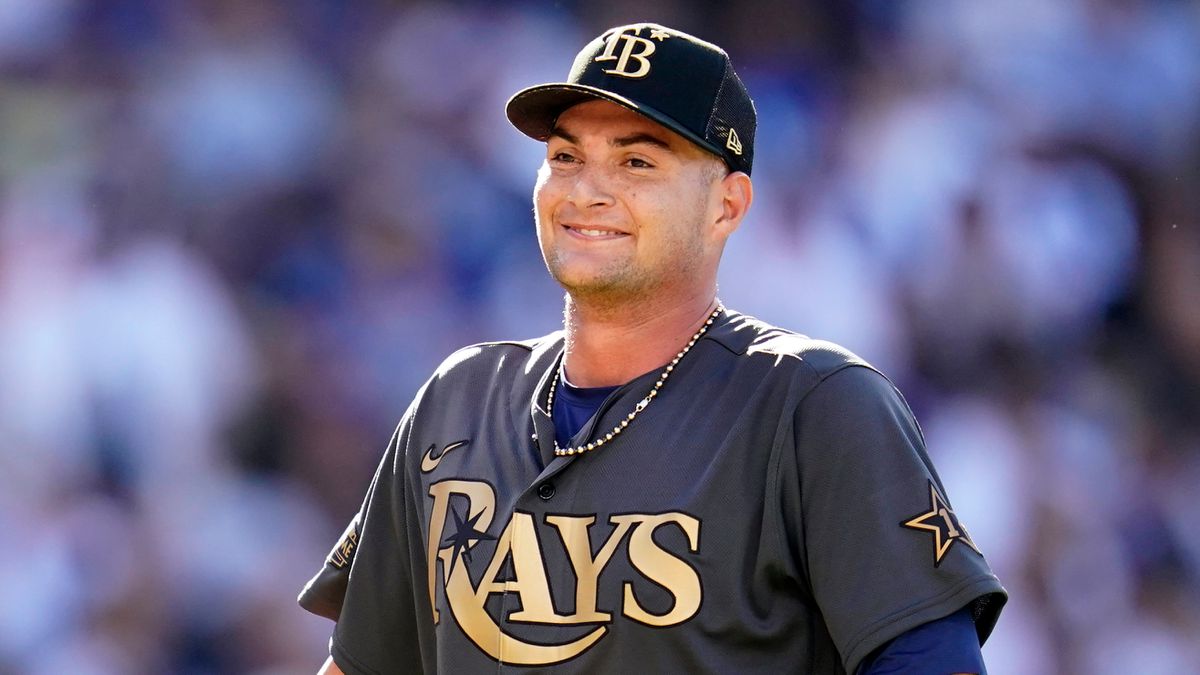 KANSAS CITY, Mo. — The most indelible image of Shane McClanahan’s All-Star experience was a smile.

His lone run as an American League starter on Tuesday at Dodger Stadium didn’t go particularly well. He allowed a double, an RBI single and a two-out home run — two runs on four hits in all — while needing 23 pitches to get three out.

But as he started to leave the mound, he glanced around and gave a smile that clearly showed that the child was fine.

“It’s the all-star game – it’s pretty cool,” McClanahan said. “I was just happy to be there. The fact that I got the start too was even cooler. … I’m just trying to figure it all out. It could be a once in a lifetime experience. So you don’t just take advantage of it when you can.

McClanahan, 25, was still smiling when he joined the Rays on Friday, recounting a series of highlights:

Souvenirs and other precious keepsakes he has received; the experiences he shared with his parents, his girlfriend and others he invited out west; and especially the interaction with better-known stars, especially Dodgers ace Clayton Kershaw, the closest thing to an idol McClanahan had grown up.

“It was awesome,” McClanahan said. “Definitely probably the best experience I’ve had on a baseball field. I was surrounded by great guys and had a lot of fun with the family. It’s a really good time.”

Monday’s practice day itinerary, starting with the press conference where he was announced as the starter (after receiving a phone call over breakfast with the news), was hazy. It was also somewhat surreal as he shared a stage, then posed for a photo, with National League starter Kershaw.

(And no, McClanahan said, he didn’t remind AL manager Dusty Baker later that he appeared against Baker’s Astros in the 2020 playoffs after Baker said onstage that he never seen him say, “Who am I going to fix Dusty Baker?” he said. “It’s Dusty Baker.”)

The weirdest part of being an All-Star, McClanahan said, was taking the mound accepting that the results wouldn’t matter.

#Rays McClanahan (bottom right) among those who encountered the @PitchingNinja at the red carpet walk today in Los Angeles. (Presumably wearing the costume @ChrisArcher22 bought it last year, which McClanahan says was the plan.) https://t.co/d9ZH5tADuW

“It was very weird. Because it’s kind of literally the opposite of what I’ve been all year,” he said. “I feel like it’s how everyone saw it. It’s a game that’s supposed to be fun and doesn’t mean anything anymore, at least.

Columnist John Romano will be sending out the latest Rays news and analysis to keep you up to date each week during the season.

You are all registered!

Want more of our free weekly newsletters in your inbox? Let’s start.

Explore all your options

“Obviously I wanted to do well, but it was a great experience. It was one of those things where experience triumphs over results.

McClanahan made the most of it, chatting with longtime aces such as Kershaw, Justin Verlander and Gerrit Cole, and everyone he found himself with, even meeting new Hall of Famer David Ortiz.

“Every person there is definitely unique in their own way,” McClanahan said, “and I tried to talk to as many people as possible.”

He returned with an autographed All-Star jersey, signed balls, custom adidas cleats (which he didn’t wear but will add to his showcase) and other “cool stuff”. The most popular? Kershaw’s signature on the jersey McClanahan brought home from Tampa. “And personalized,” he noted.

McClanahan had had an idea of ​​what to expect from three-time All-Star teammate Corey Kluber and exchanged texts with his bosses upon his arrival, with coach Kyle Snyder reminding him to enjoy “one hell of a accomplishment”.

McClanahan told Rays manager Kevin Cash he hoped to go the inning on three pitches (“I was hoping for that too,” Cash said, “but that’s okay.”) and joked that he might throw 120 mph (“I was glad he didn’t don’t do that,” Cash said.)

When McClanahan took the mound, he had plenty of support.

Cash, watching from his St. Petersburg home, noted the pride the entire Rays organization took in having a local All-Star — a 2018 USF first-round pick — start the game. He said he was delighted to see the AL team erase the early deficit in a 3-2 win.

“Probably the happiest I’ll ever be for a (Yankees star Giancarlo) Stanton homer,” Cash said.

Snyder was with his son and his wife in Sarasota for the 72nd birthday of his father, Don. McClanahan’s appearance added to the joy of the festivities. “For me to sit next to my dad and have a student, someone you’ve had the opportunity to coach and lead, doing something as remarkable as that, that’s pretty cool,” Snyder said.

Second baseman Brandon Lowe agreed to an All-Star getaway with his wife, Madison, but — in a nod to his good friend and great teammate — with one caveat: “I don’t care what we do. , we have to be on the lookout for the first pitch. … It was so much fun seeing the graphics, showing the best ERA in the majors and all that other stuff. It was really cool to watch.”

The way the game went didn’t matter to them either. Snyder said he expected McClanahan to be a little excited when he took the mound, but he knew he was fine when he saw the smile at the end.

“Perspective,” Snyder said. “He went out there and thoroughly enjoyed the experience, locked it down for 40 minutes and couldn’t have enjoyed it more. No matter the outcome, he’s going to savor it for the rest of his life.

Starting the All-Star Game is an honor he deserved

Proud of our guy 💙 pic.twitter.com/JtSZH8UqNr

Sign up for the Rays Report weekly newsletter to get fresh insights on the Tampa Bay Rays and the rest of the majors from sports columnist John Romano.

Where to buy the Mr. Bailey x Adidas Originals Ozlucent sneakers? Everything we know so far