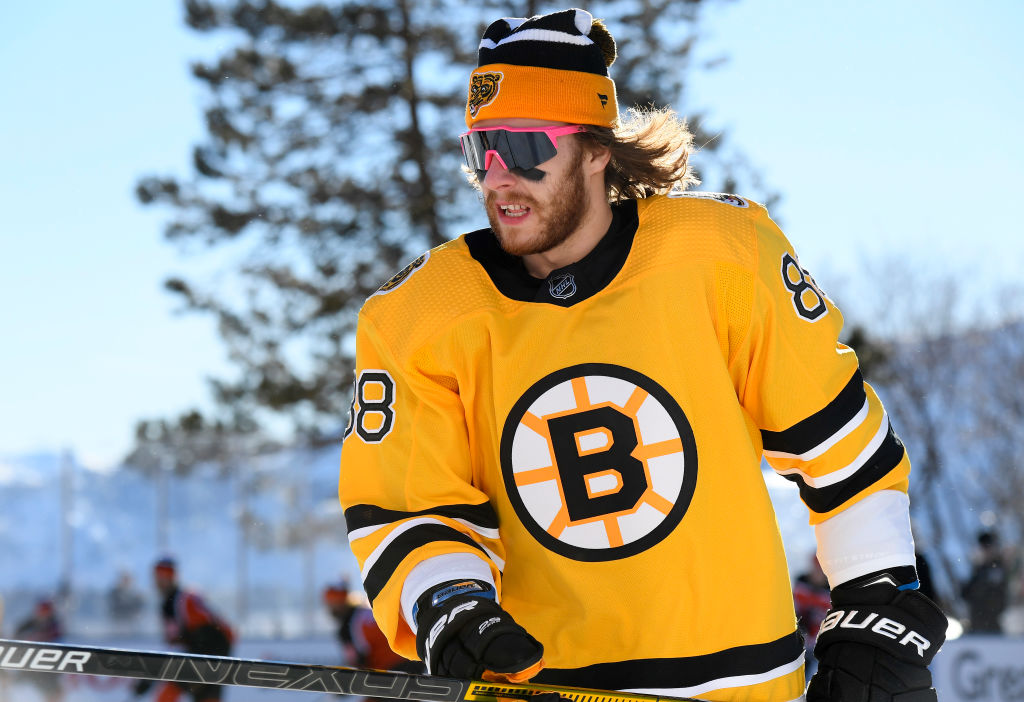 The NHL has announced another installment of the Reverse Retro jerseys that debuted during the 2020-21 season. Some jerseys were hugely popular (Colorado, Carolina, Minnesota, *kisses from the chefs*), while others garnered much less enthusiasm (Dallas and Detroit, yuck). According to Glaceticthis new version of the old should be ready in time for the 2022-23 season.

So, as a jersey nerd, I felt it was my duty to throw my creative cap into the mix for the new version of the Boston Bruins.

Step One: Check the Bruins Chest

As with any task, our first step is to determine which design should inspire the jersey. The Bruins are a double-edged sword in this regard. As an Original Six franchise, there are so many different options to shoot and so much story to work with. In a similar vein, the Spoked B is a classic look that has remained pretty much constant for most of the club’s existence. Where some see a challenge, I see an opportunity.

To start, here is a preview of the first Reverse Retro unveiled by the Bruins. As fans will recall, the team wore these beauties at their outdoor game at Lake Tahoe last season, highlighted by David Pastrnak’s Macho Man Randy Savage sunglasses, Jaroslav Halak’s mullet under his helmet and Pastrnak’s sound phrase of the year, decrying the national show for pulling him away from Barbie Girl in the locker room. They were amazing jerseys, and some teams would love to have the luxury of hitting a first-pass home run like the Bruins did. But we’re not here to read an article that says “play the hits”. We will not hesitate to say to redo this jersey. That doesn’t mean we can’t take pieces of that idea and implement them into our new jersey.

There are two philosophies to choose between when designing our jersey: Going back to a championship team and adding a modern take on a classic jersey Or (yes, that’s a Bobby Orr pun) choosing a jersey that was universally hated when they debuted but developed a cult following in the years after their retirement.

Nostalgia sells, and there’s a warm, fuzzy feel that comes with the return of a jersey that generations of yore saw their favorite players wear and is now worn by this generation’s favorite players. This approach would probably involve picking a 1939 era shirt to capture both 1939 and 1941 Cups or modifying a shirt from the 1970 and 1972 teams. ‘there are four lines was part of the team.

Bobby Orr is still one of Boston’s most recognizable hockey faces. Take a spin around TD Garden and you’re guaranteed to see at least a few “Orr 4” jerseys.

The idea of ​​turning to a quirky jersey that was hated in its day but is enjoying a renaissance seems odd but has past examples to reference. Arizona unveiled their purple desert-themed coyote-head jersey with the desert landscape based on the 1999 third jersey. The Calgary Flames released their “Blasty” jersey, featuring a fire-breathing horse head at the instead of their typical C crest.

The Vancouver Canucks released their faded jersey from 2001, updating the original red and blue with their current colorway of green and blue. Two-thirds of this group were very successful. Sorry Canucks, that’s not the only thing you had against you last season.

For a Bruins trick, there are two variations of a realistic Bruin that can be debated. First up, the affectionately labeled Pooh Bear jersey the team sported from 1996-2006. Bruin’s head in the center of that gold jersey has a realistic touch to it, perhaps with a slight smile through it? Either way, the shoulders are adorned with a size 72 “BRUINS” wordmark, in all caps, ensuring every fan knows which team was on the ice. The black and white design around the base of the sleeves and the bottom of the jersey added an extra burst of cheerfulness to this jersey which seems to encompass the late 90s and early 2000s as well as everything that could ever happen.

Option number two is the less affectionately nicknamed “Crack Bear” which was a shoulder logo for the 1980s Bruins. As the name suggests, this Bruin head is painted black and gold with very, very wide open. The teeth are bared and he looks very fierce with an uncontrollable side sprinkled in for good measure. That logo didn’t make it to the center crest, but it graced the shoulders of Bruins players at home and on the road during the ’80s.

So which logo wins out? After going down the nostalgia route on the last lap, we make the bold decision to choose one of the logo variants that didn’t get their due. The nostalgia for an Orr-era jersey is there, but franchise icons Cam Neely and Ray Bourque were featured in the first Reverse Retro. Now is the time to be bold.

The question now is, which bear takes center stage? Trusted news source Twitter is split on the issue. “Crack Bear” made an appearance as a shoulder patch on the latest Reverse Retro jersey. Because of this, Pooh Bear is making a comeback. Shiny gold looked fantastic last year. This is an option to replace the mustard yellow of the original Pooh Bear jersey.

What I would do is return the shirt. Keep the Pooh Bear logo but put it on a white jersey base. Instead of the massive wordmark, we’d tone it down with the modern Spoked B logo, connecting the old with the new. Take the gold colourway from the first jersey and run it over the shoulder pad area. Paired with the same yellow color for the lower third of the sleeve and capped with a black bar separating the yellow from the white portion of the jersey.

As fun as it is to go for chaos, we can’t in good conscience suggest pairing this jersey with gold pants or gear. I would, however, add yellow socks with the typical Bruins look of two stripes, one black, one white.

The Bruins’ rich history is a blessing and a curse. The team has decades of jerseys to choose from for their next Reverse Retro setup, but most of the jerseys from the old days are almost identical to the others. In the Pooh Bear, the Bruins have an interesting ride they can bring back in a limited capacity, placating a younger crowd looking for something different than the Spoked B without getting too wacky and instituting a complete break from the past. coherently.

I will check my mailbox regularly for a jersey. Thank you Adidas!

Vince Reilly covers the Boston Bruins for The Hockey Writers. Vince graduated from Grinnell College with a bachelor’s degree in history and political science and earned a master’s degree in sports administration from Belmont University. He has worked in the Predators Front Office on Analytics and Operations, with Major League Baseball in Replay, and now with Tufts University as Director of Hockey Analytics. Vince can always be found with a coffee in hand and he promises his sarcastic tone will always shine through his work.