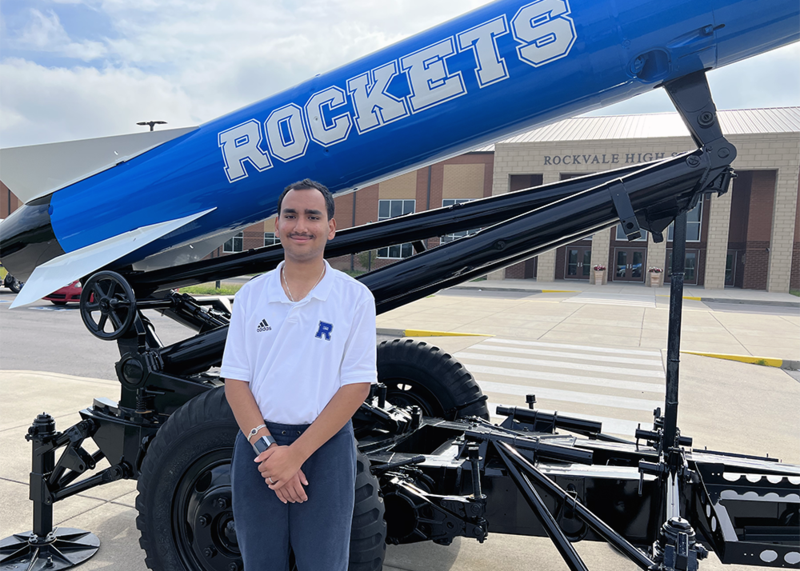 You won’t find a bigger fan of all things Rockvale High School than senior Sulav Rayamajhi.

He is affectionately known as the “Mayor of Rockvale” by his teachers, administration and classmates.

He is also a coach and honorary coach of the women’s football and basketball teams. During basketball season, you’ll find him in costume standing by the bench, doing whatever it takes to support his team.

Sulav sat down to talk about his school, his homework and his future.

Question: What do you love so much about Rockvale?

“I like sports, like when I coach football, and movies, and sometimes I coach women’s basketball. I’m usually with the DA sometimes during baseball. I don’t coach baseball, but s they need administrative supervision, I come right away.

Q: How many activities do you participate in and how did you get involved in these activities?

“I only do two, football and basketball. Baseball is only for sports administration when they need help with supervision. I played football in my 10th year , like the last day of school. I played in the blue and white game. After that, when I was a junior, I decided to be a manager and a football coach, then I was promoted – I became the ‘mayor’ here during my freshman year.

Q: How did you become “Mayor” and what are your duties?

“Mr. Luker gave me the job of mayor. I always check that everything is fine and that no one is fighting.

Q: Do you have a special shirt that you like to wear?

“This shirt,” he said pointing to the shirt he was wearing. “It’s the Rockvale Football Honor Badge – for college – Rockvale Adidas. One of my favorite coaches gave it to me, Coach Nelson. He always helps me a lot, he takes care of me. We let’s talk together, we talk about movies, games and stuff.

Q: What do you want to do after high school?

“I’m thinking of doing a bachelor of science in sports administration and also physical education, like at Tennessee Tech, but to do that I have to get that ACT.”

Q: Is there anything else you would like to say?

“I want to thank Coach Nelson for always helping me a lot; Coach Hockenberry, Coach Crutchfield and Principal Luker.