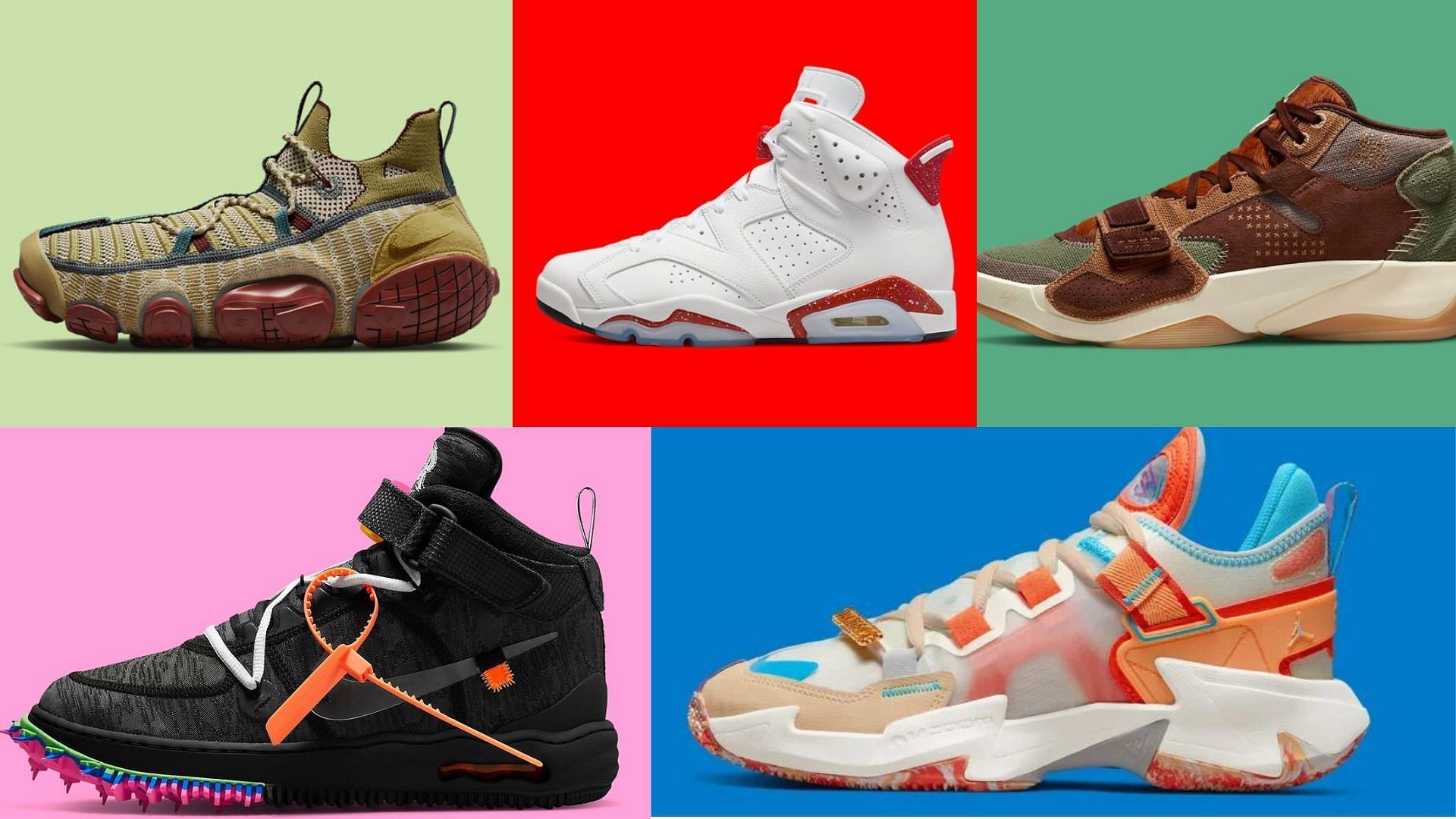 So far, June 2022 has seen a slew of highly anticipated sneaker releases. Every shoe company, from Nike to Adidas to Reebok, is working hard to wow their followers and sneaker lovers with their inventive ideas and eye-catching features.

Upcoming coveted sneakers such as the Air Jordan 6 Red Oreo, Nike KD 15 Beginnings and more will make Week 4 of June just as spectacular.

Although they may look familiar to some, Adidas and Yeezy will release two new shades of the Adidas Yeezy Boost 350 V2 in 2022. The lighter shade is “Bone”, while the darker shade is titled “Onyx”. .

Originally worn with SPLY-350 stripe to the side rails, both new colorways feature Primeknit uppers with side stripes devoid of SPLY-350 branding. Cushioning is activated by a full-length Boost, which is encased in a translucent footbed and sole.

On June 20, 2022, the Adidas Yeezy Boost 350 V2 “Onyx” and “Bone” will be officially launched. Browse adidas.com/yeezy, Yeezy Supply and select stores to grab these pairs. The asking price is set at $230.

With this incredible hue, Russell Westbrook’s latest Jordan Brand sneaker, the Why Not.5 (which premiered earlier this year), is ready to take on spring and summer.

The “Can’t Beat That Price” Jordan Why Not.5 features retro-inspired embellishments all around, including a profusion of strong hues like electrifying blue, blazing orange and purple.

Gold lace linings with the words “CAN’T BEAT” and “THAT PRICE” sparkle brightly across the forefoot for a little extra bling. A patterned outsole and oversized midsole make it perfect.

The Jordan Why Not.5 “Can’t Beat That Price” is set to release June 21st for $130 at Nike.com and authorized stores.

Nike’s fully recyclable ISPA Link sneaker, which was unveiled earlier this year, now comes in “Barley” and “Medium Olive” colorways. The durability-focused suit, which is guided by the Improvise, Scavenge, Protect and Adapt design concept, surpasses any previous model in looks and design.

The Nike ISPA Link is made in just eight minutes and requires no gluing, cooling or heating process. The pair can be taken apart, recycled and reused as part of the company’s Move to Zero effort.

The Nike ISPA Link in ‘Barley/Desert Moss’ & ‘Black/Enigma Stone’ [$225] Releases on Wednesday, June 22 via the online draw on stay rooted.com. The registration window is open now and closes Tuesday, June 21 at 3:00 p.m. CST, regardless of the countdown. Sizes 6-13 #stayROOTED

The Nike ISPA Link in ‘Barley/Desert Moss’ & ‘Black/Enigma Stone’ [$225] Releases on Wednesday, June 22 via the online draw on stay rooted.com. The registration window is open now and closes Tuesday, June 21 at 3:00 p.m. CST, regardless of the countdown. Sizes 6-13 #stayROOTED https://t.co/I3qVLNuV0J

The Nike ISPA Link “Black/Medium Olive” and “Barley” colorways will be available to order through SNKRS as well as at select outlets on June 22 at 4 p.m. EDT. The pair will retail for $225 to purchase.

The Jordan Zion 2, Zion Williamson’s second signature shoe with Jordan Brand, is set to release later this year, following the popularity of its inaugural silhouette earlier this year. The shoe’s “Voodoo” colorway will be released in June 2022.

The exterior of the sneaker is canvas and suede, with varying shades of brown and green used throughout. Zoom Air and Nike branding sits on the forefoot flap, and the Zion crest sits on the pony hair tongue area.

The heel features a “voodoo” skull emblem, with juxtaposed sashiko stitching throughout the sneaker. The cream midsole, like the Jordan Zion 1, is likely to include a Zoom Air strobel arrangement, with a gum outsole emblazoned with Zion’s insignia crowning the shoe.

The Jordan Zion 2 “Voodoo” will be priced at $140 starting June 22 through Nike’s online site and authorized stores.

Off-White x Nike collaborations always grab headlines for their distinctive designs and aesthetics. Now, in June 2022, their one more design is set to debut.

The upcoming Off-White x Nike Air Force 1 Mid “Black” shoe is slated to release on June 23, 2022. You can grab these head-turning pairs for $185 on Nike’s SNKRS app and from affiliate sellers.

This Nike Air Force 1 Mid will be offered in two colors: white and black. The “Black/Clear Black” version, which has a tricolor accent on the midsole, is revealed now.

The shoes feature a playful midsole, which combines a range of patterns and textiles to create a multi-dimensional shoe. Details were sparse at the time, but the top appears to be made of a mix of woven materials, incorporating ripstop.

Originally created in 2006, the “Defining Moments Pack” has inspired a wide range of footwear over the years. The upper of this Air Jordan 36 Low comes in a crisp Black with a glossy top layer.

Continuing all the way down the midsole, the golden medial stripe gives the sneaker even more sparkle. The distinctive Jumpman and side infinity tag have additional gold embellishments. The upper is reinforced with a White midsole and Frosted outsole.

The Reebok Premier Road Modern Mid is a great blend of idealistic design and simplistic color. With an all-black exterior, the boot-like structure is entirely monotonous. The design incorporates sculpted geometric lines that are separated between layers and feature dramatic detail. The Reebok brand’s Vector logo is reworked on the sculptural exterior.

On June 23, 2022, the KANGHYUK x Reebok Premier Road Modern Mid ‘Black’ and ‘Blue’ will be available online at Dover Street Market. Pick up these two new colorways via the Reebok and KANGHYUK e-commerce site from June 25th.

The base of the shoe is made of a multi-layered mesh in navy and blue, with a black heel counter. The tongue is covered with a hot pink KD emblem, surrounded by colorful basketball-themed graphics.

The lateral and medial sides of the sneaker sport black TPU wings meant to restrict the foot, and a pastel yellow Swoosh replaces the midfoot strap that was previously present on the sneaker. The black midsole features a full Zoom strobel system and the shoe is completed with a multi-dimensional navy blue outsole.

The Nike KD 15 “Beginnings” will be available for purchase on Nike.com and in select stores on June 25th.

Read also
The article continues below

The legendary Air Jordan 6 returns this summer in a “Red Oreo” configuration, ideal for sunny days, according to Jordan Brand’s Summer 2022 list. The highly anticipated Red Oreo AJ6 have been in the news for some time, after months of delay they are finally arriving in June 2022.

After MJ won his first NBA championship with the Chicago Bulls in 1991, the design became a cult favorite.