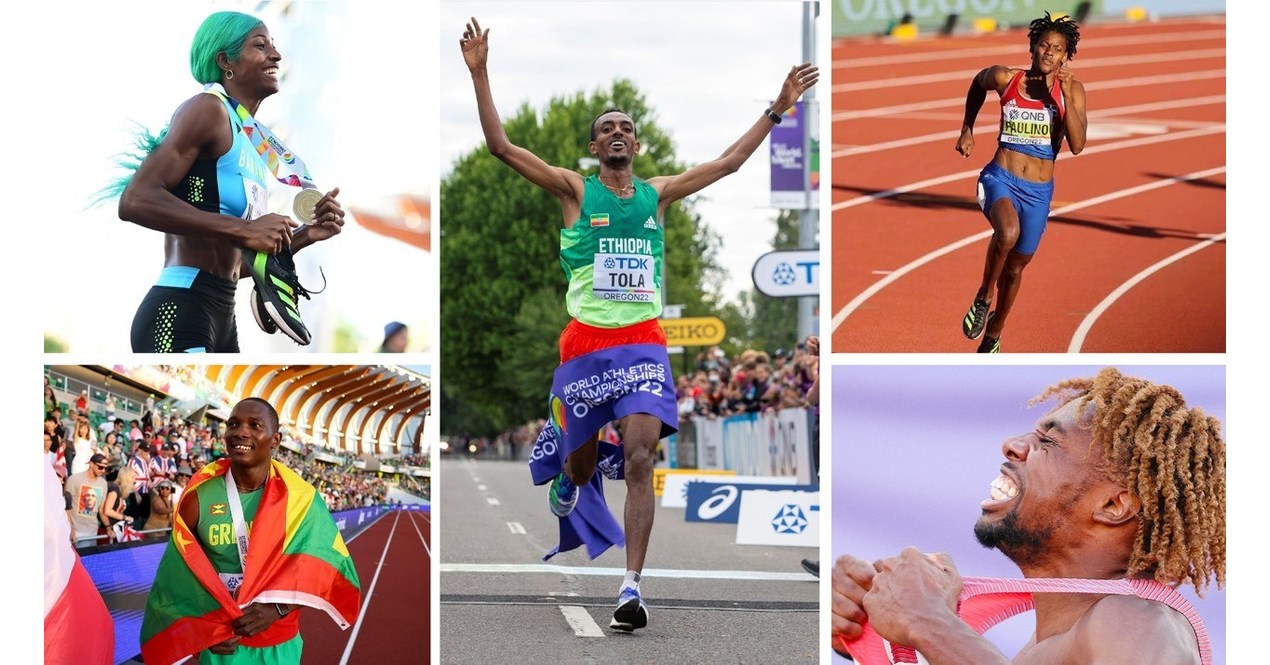 SHANGHAI, August 4, 2022 /PRNewswire/ — At the recently concluded World Championships in Athletics in Eugene, Oregonathletes signed with adidas have won race after race, winning a total of 24 medals (8 gold, 6 silver and 10 bronze) and breaking a world record, two world championship records and a American record.

In the men’s marathon, with competitors from around the world, Tamirat Tora, from Ethiopia, broke the race record held since 2009, running away with a World Championship record of 2:05:36. Wearing adidas ADIZERO ADIOS PRO 2, he beat his compatriot, Mosinet Geremew, by more than a minute.

In the men’s 110 meter hurdles, the American Grant Holloway, wearing ADIZERO FINESSE, became the first athlete to defend her championship in the 110m hurdles in nearly two decades, while in the men’s 400m hurdles, Brazil’s Allison dos Santos, wearing ADIZERO PRIME SP2, won the gold medal. gold and broke the World Championship Record in stride. Another defending champion was American Noah Lyles in the men’s 200 meters, wearing adidas ADIZERO PRIME SP2 as he broke the 26-year-old national record for the 200 meters by 0.01 seconds, making him the third fastest athlete in men’s 200 meters history .

In the women’s 400 metres, Shauna Miller-Uyber of the Bahamianwon the gold medal in the ADIZERO PRIME SP2, while in the women’s 100 meters hurdles, from Nigeria Tobi Amusan won the gold medal in ADIZERO AVANTI, breaking the world record with a time of 12.12s. In addition, Eleanor Pattersonof Australia, wearing adidas ADIZERO HJ, won gold in the high jump with a personal best; and Anderson Peters defended his championship title in the javelin…

As the world’s best athletes gathered to compete, the ADIZERO series of running shoes led the charge and broke one world record after another.

With its breakthrough “midsole revolution”, adidas has taken the lead in the battle for technology

Take the ADIZERO ADIOS PRO 2, the running shoe chosen by men’s marathon gold medalist Tamirat Tora, for example. Compared to other high-tech running shoes, the ADIZERO ADIOS PRO 2’s propulsion system is more advanced. Its midsole material – LIGHTSTRIKE PRO is softer, lighter and more elastic than EVA or TPU materials. In order to better adapt to runners’ feet, adidas uses its ENERGYRODS carbon column design in the midsole, rather than the single carbon plate used by so many other brands. Thanks to the two-layer “sandwich” structure of LIGHTSTRIKE PRO, with a carbon column for the forefoot and a carbon plate for the rear heel, the momentum of the five carbon columns can be fully released, while the lighter forefoot allows for significantly increased resilience, leading to better propulsion.

The core parts of a running shoe are its outsole, midsole, and upper. Among these, the midsole determines the elasticity and cushioning of the shoe, which are essential for performance.

Since the late 1970s, after American brand Brooks first added elastic EVA material to the midsole of running shoes, a marathon battle centered around the so-called “midsole revolution” has raged. is pursued at the feet of the best runners. Especially in recent years, after the World Athletics Federation opened the door to technological innovation, innovation has become essential for global running shoe manufacturers like adidas.

adidas first took the lead in this marathon in 2013, when it launched its Boost technology, combining both soft cushioning and agile responsiveness, previously unheard of and delivering a whole new experience to runners around the world. entire.

Four years later, adidas launched its Futurecraft 4D technology, which uses 3D printing technology to synthesize the midsole of running shoes with resin materials. This meant that consumers could customize their own running shoes to best suit their own characteristics, achieving the perfect combination of cushioning, stability and comfort.

It’s worth mentioning that the adidas midsole revolution didn’t stop there. ADIZERO ADIOS PRO 3 running shoes, another from ADIZERO record series, was released in June this year. It adopts an upgraded design for the ENERGYRODS 2.0 energy carbon column, which combines the previously separated energy carbon columns to form an entire frame that runs parallel to the direction of the foot’s metatarsal, striving to provide riders with stiffness. appropriate and superior energy return.

On the other hand, as more young consumers turn to eco-friendly brands, adidas has also weighed in on its “low-carbon tech tree.”

adidas has always prioritized the elimination of plastic waste as a long-term goal and recently came up with its “Three Loop” sustainable strategy, consisting of its recycling loop (sourcing raw materials that have been previously recycled), its circular (produce a manufactured product to be remade) and Regenerative Loop (manufacture of products from natural materials). This focus on sustainability is one that adidas will continue to promote in the future.

Take the 4DFWD X PARLEY running shoes, launched in April this year, for example. The upper material comes from a high performance yarn made from 81% Parley Ocean Plastic materials, which have been recycled from plastic waste found on isolated islands, beaches and coastal communities. Around 60% of adidas’ current products are made from sustainable materials such as natural rubber, sugar cane and marine debris. By 2025, adidas plans to increase this percentage to 90%.

In 2020, the Stan Smith Mylo series became the world’s first sustainable sneaker made from mycelium Mylo material, which is a purely organic material made from mycelium and jointly developed by adidas and its partners. As a substitute for leather, its potential to eliminate animal products in footwear is immense.

In addition to adapting and reusing marine plastic waste and using natural materials to manufacture products, adidas also said in its 2021 financial report that since its first generation of recyclable sports running shoes FUTURECRAFT.LOOP, launched in 2019, the company increased the number of MTBR (Made To Be Remade) product offerings to include additional running shoes, apparel and more.

That’s not all adidas does to innovate with its products in the name of achieving low-carbon and environmental protection. In April this year, adidas and ALLBIRDS teamed up to release the ADIZERO X ALLBIRDS 2.94 KG CO2E running shoes. As an advanced version of the FUTURECRAFT.FOOTPRINT running shoes, it is a sporty low-carbon running shoe, made from innovative materials with an outsole jointly developed by both parties. Its carbon footprint for a single pair is only 2.94 kg of carbon dioxide equivalent.

According to legend, Alexander the Great set out on a journey to find Oceanus, the sea at the end of the world. For adidas, its endless sea may be the continuous evolution of running shoe technology and the innovation of business technology.

In upcoming track events, how many more records will athletes break with the help of adidas’ ever-evolving running shoe technology? In the marathon of product innovation, where is the end for innovative adidas?

For the first of these questions, the answer will always be “whatever record awaits us”, while for the second it is simply that “the journey never ends”.

MEIRAGTX HOLDINGS PLC: Entering into a Material Definitive Agreement, Creation of a Direct Financial Obligation or Obligation Under an Off-Balance Sheet Arrangement of a Registrant, Unregistered Sale of Equity Securities, Other Events, Statements financials and exhibits (Form 8-K)