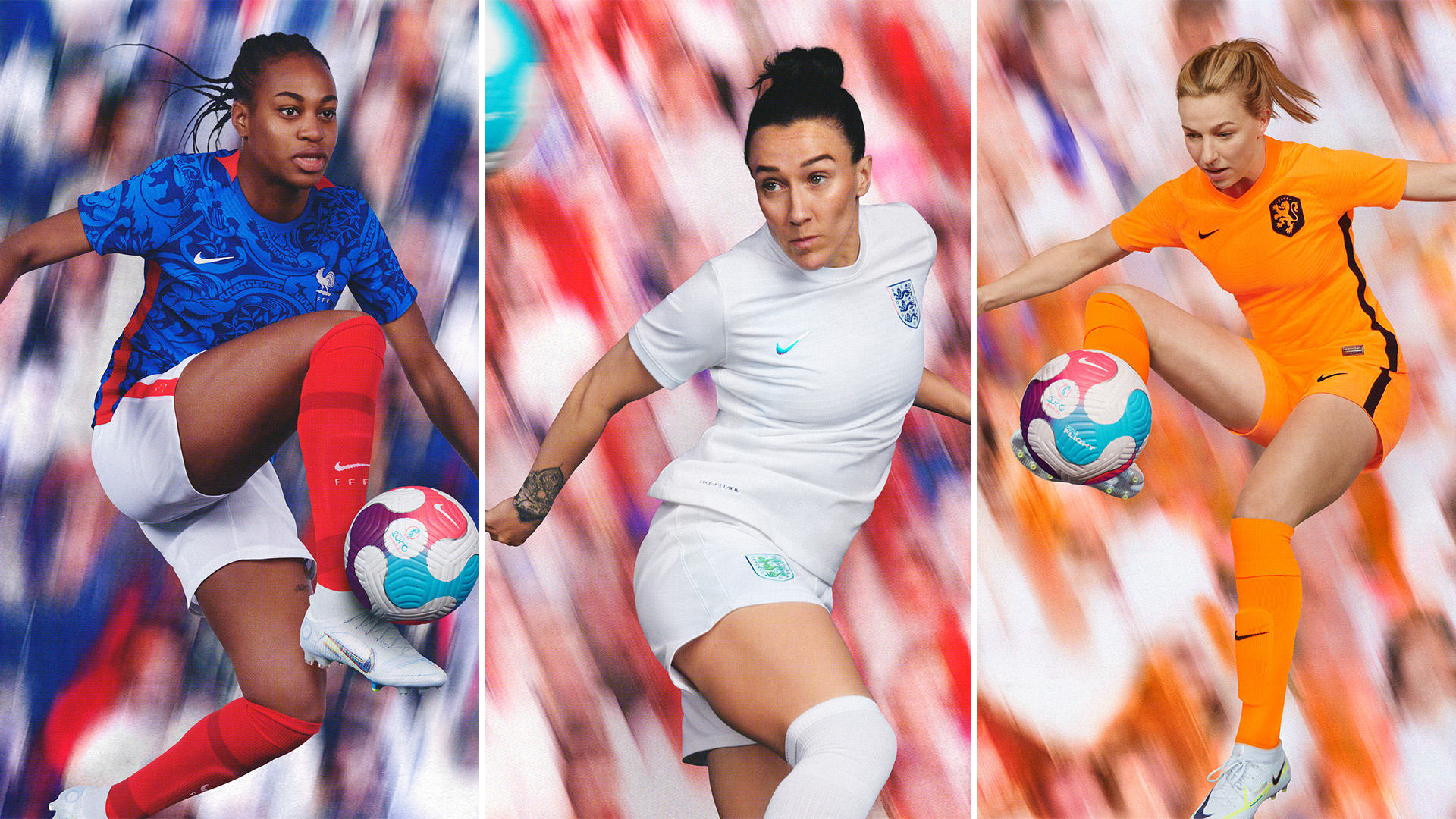 Excited for the Women’s European Championship this year? Here are all the national team kits from Adidas and Nike you can buy right now

We independently choose all of the products featured on our site. When you purchase something through the links provided, we may earn a commission.

It’s going to be an exciting sporting summer with the European Women’s Championship taking place in England this year. The tournament will start on July 6 and the final will take place at Wembley on July 31.

Cities like Brighton and Hove, Manchester, Sheffield and Southampton will host group matches. The rapid growth of women’s football meant that tickets for the final sold out less than an hour after going on sale. However, you can still pick up some of the new kits released for the tournament by big names like Adidas and Nike.

All Adidas designs focus on durability as the shirts are made from materials using Parley Ocean Plastic. The kits were first revealed in a photo campaign set in the same hotel used to film the Spice Girls’ “Wannabe” music video.

Nike has also started releasing its kits for the English, French, Dutch, Norwegian, Portuguese and Finnish national teams. The brand’s campaign for their released kits focuses on paying tribute to those who have contributed to the development of the women’s game and the empowering stage it currently finds itself in.

Here are all the European Women’s Championship national kits released so far.

The Belgian national home shirt pushed the boat out by opting for a black kit rather than its usual red colourway. Nevertheless, it is a clean shirt in the colors of the Belgian national flag, notably with the three yellow stripes and the brand logo, which goes well with the red line detail on the collar and sleeves.

The France home kit returns to its usual royal blue color, but Nike have added a twist with a decorative design. The print is inspired by and references neoclassical art and architecture. This is combined with the nation’s tricolor to form the complete kit: a blue jersey, white shorts and red socks.

Nike have put together a sleek and modern away kit for France, which is simply white with a rose pink national crest. A strip of light pink embroidery also runs down each side of the shirt with the French flag on the left outside sleeve completing the look of a classic French away shirt.

The England home kit is constructed using a bespoke knit pattern that references the angular line of cut diamonds. These refined details pair well with an iridescent glow added to the national team badge, which matches Nike’s message of honoring the players who have made women’s football what it is today. The singular triangle cut at the back of the collar completes the look in another stunning take on England’s classic white home shirt.

Nike have gone bold with a crimson colourway for the away kit to create a national team jersey unlike anything that has come before. Again, the insignia has an iridescent pearl-like glow that almost resembles fire limbs with a red coloring. The brown on the collar and sleeve lines add a nice contrast, while the triangular theme in the embroidery on the back of the collar is a bright little touch to continue their diamond theme.

Germany opted for a classic white home shirt that is synonymous with them. But it’s all in the details of the sleeves, which are adorned with small squares in the colors of the German flag – black, yellow and red. It creates a pattern that makes the sleeves stand out – the same effect is repeated once on the left side of the collar.

The away shirt, on the other hand, comes in a teal colourway, featuring a unique abstract pattern that looks like moving water. It’s also a throwback to a similar colourway used by the men’s team at the 1996 World Cup. The woven German crest featured in the center of both shirts completes the look.

Get it at Adidas for £70.00 / Not currently available in the United States

Nike stuck with the proven Dutch home kit that we are used to seeing at several football tournaments. But, they’ve also revitalized the country’s classic orange jersey with a sleek new edge of complementary black trim. The abstract embroidery on the border runs down both sides of the shirt.

Keeping with the abstract theme, the away shirt is inspired by From Stijl, which is proudly a Dutch art movement. Color-blocked blue and red square rectangular shapes are randomly placed on the shirt to achieve the colorful aesthetic of the art movement. An embroidered blue swoosh and national crest complete the look.

Adidas have only given Northern Ireland a new home kit so far. It’s a simple but effective kit with a nod to old classic Northern Ireland shirts. The grass green shirt, with the traditional white crew neck and plain sleeves, makes for an effective colourway. A splash of bright color comes from the yellow on the national badge.

Get it from JD Sports for £65.00 / Not currently available in the United States

Spain’s home kit is very classic and will be familiar to those who follow major international tournaments. The simple red colourway with navy and yellow detailing on the sleeve cuffs is lovely. The bold navy collar adds character to the shirt, with the entire design reminiscent of the 90s style of the Spain national team home shirts.

Get it at Adidas for £70.00 / Not available in the United States

A lighter and airier approach has been adopted on the Spain away shirt, with the same design featured on the Germany away shirt. The colorway of the Spanish away kit is metallic blue, which looks more like clouds floating in a blue sky than water. Every detail, including the national emblem, Adidas logo and stripes, is in navy blue giving the look a nice contrast.

Get it at Adidas for £70.00 / Not currently available in the United States

This summer, Sweden launched a bold campaign behind their home shirt for the Euros. Adidas created an entire campaign to give the country’s opponents all the details about each of their players, called ‘How to Stop Sweden’. The shirt itself shows off the national classic yellow and blue colourway. A nice little detail on the back of the collar with the word ‘Sverige’ shows off the Swedish pride.

Get it at Adidas for £49.00 / Not currently available in the United States

Sweden’s away kit is inspired by the Swedish coast. The dark navy colourway features a wavy pattern on the shirt, with a wavy silhouette also present on the collar. Bright yellow branding details of the Adidas logo and the three stripes bring out the color of the shirt.

These Portland start-ups represent a new generation of footwear

An Overview of Bitcoin Consolidations